Saving one animal will not change the world, but for that one animal the world will change forever.

Why You Should Spay or Neuter Your Pet

Stopping pet overpopulation starts with you!

reprinted from The Humane Society of the United States 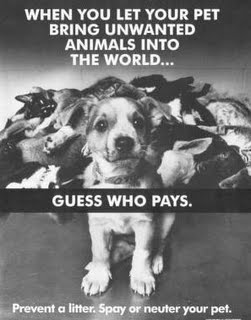 In every community, in every state, there are homeless animals. In the U.S. as a whole, there are an estimated 6-8 million homeless animals entering animal shelters every year. About half of these animals are adopted, and tragically, the other half are euthanized. These are healthy, sweet pets who would have made great companions.

The number of homeless animals varies by state—in some states there are as many as 300,000 homeless animals euthanized in animal shelters every year. These are not the offspring of homeless "street" animals—these are the puppies and kittens of cherished family pets and even purebreds.

Yes, your pet's offsping could be shelter animals

Many people believe that their pet's puppies or kittens would never become homeless shelter animals. But the reality is that every time the dog finds his way under the fence to visit the neighbor's female dog, or the indoor/outdoor cat comes back home pregnant again, the result is a litter of dogs or cats. Even if they are placed into homes, it is still possible for them to end up in shelters once they become "hard to handle," or for them to reproduce further and for the next generation of puppies or kittens to wind up homeless.

Many people are surprised to learn that nationwide more than 3 million cats and dogs are euthanized in shelters. Spay/neuter is the only permanent, 100-percent effective method of birth control for dogs and cats.

Not just for dogs and cats

When being conscientious about the pet overpopulation, don't forget to spay or neuter your pet rabbit. Rabbits reproduce faster than dogs or cats and often end up in shelters where they must be euthanized. Spaying or neutering rabbits can reduce hormone-driven behavior such as lunging, mounting, spraying and boxing. Spaying females can prevent ovarian, mammary and uterine cancers, which can be prevalent in mature females.

Millions of pet deaths each year are a needless  tragedy. By spaying and neutering your pet, you can be an important part of the solution. Contact your veterinarian today and be sure to let your family and friends know that they should do the  same.

Myth: It's better to have one litter first.
Fact: Medical evidence indicates just the opposite. In fact, the evidence shows that females spayed before their first heat are typically healthier. Many veterinarians sterilize dogs and cats as young as eight weeks of age.

Myth: My children should experience the miracle of birth.
Fact: Even if children are able to see a pet give birth - which is unlikely, since it usually occurs at night and in seclusion - the lesson they will really learn is that animals can be created and discarded as it suits adults. Instead, it should be explained to children that the real miracle is life and that preventing the birth of some pets can save the lives of others.

Myth: But my pet is a purebred.
Fact: So is at least one out of every four pets brought to animal shelters around the country. There are just too many dogs and cats - mixed and purebred alike.

Myth: I want my dog to be protective.
Fact: Spaying or neutering does not affect a dog's natural instinct to protect home and family. A dog's personality is formed more by genetics and environment than by sex hormones.

Myth: I don't want my male dog or cat to feel like less of a male.
Fact: Pets don't have any concept of sexual identity or ego. Neutering will not change a pet's basic personality. He doesn't suffer any kind of emotional reaction or identity crisis when neutered.

Myth: But my dog (or cat) is so special. I want a puppy (or kitten) just like him/her.
Fact: A dog or cat may be a great pet, but that doesn't mean her offspring will be a carbon copy. In fact, an entire litter of puppies or kittens might receive all of a pet's (and her mate's) worst characteristics.

Myth: It's too expensive to have my pet spayed or neutered.
Fact: There are many affordable spay/neuter options in our community. Please see the resources we have made available. Whatever the actual price, spay or neuter surgery is a one-time cost - a relatively small cost when compared to all the benefits. It's a bargain compared to the cost of having a litter and ensuring the health of the mother and litter; two months of pregnancy and another two months until the litter is weaned can add up to significant veterinary bills and food costs; particularly if complications develop. Most importantly, it's a very small price to pay for the health of your pet and the prevention of the births of more unwanted pets.

Myth: I'll find good homes for all the puppies and kittens.
Fact: You may find good homes for all of your pet's litter. But each home you find means one less home for the dogs and cats in shelters who need good homes. Also, in less than one year's time, each of your pet's offspring may have his or her own litter, adding even more animals to the population. The problem of pet overpopulation is created and perpetuated one litter at a time.